There is without doubt a greater number of hybrid or designer dogs that are Poodle mixes than is the case with any other breed.

The American Canine Hybrid Club, which keeps track of such things, has included at least 60 Poodle mixes on its roster of mixed breeds.

Whether you call the dog in question a Poodle mix, a Poodle hybrid, or a designer Poodle, it’s more or less one and the same thing.

It’s a dog that has one Poodle parent and the other parent that is another breed.

Chances are, the designation that is given to that particular mixture has a ‘doodle’ or an ‘oodle’ as part of the name.

The facts that Poodles don’t shed, and are highly intelligent, have a lot to do with their being such a popular candidate for being one-half of a mixed breed.

Another reason for the Poodle’s popularity as half of a designer dog is that they come in three sizes, so you can match a Poodle to almost any other breed if you have one that’s the appropriate size.

Is a dog whose parents are both purebreds of different breeds more or less valuable than its parents?

It can be hard to say, but a designer dog breeder usually tries to breed dogs that have excellent blood lines, in the hopes of breeding puppies that are healthy and whose temperament and conformation may be at least somewhat predictable.

These puppies can sometimes come with a higher price tag than did their parents.

The American Canine Hybrid Club is not the only organization that keeps track of Poodle hybrids and other hybrids.

A few hybrids are recognized by the American Kennel Club, but cannot necessarily be registered or appear in AKC-sponsored shows or competitions.

These different organizations don’t necessarily give the same mixed breed the same name.

A Beagle-Poodle mix might be listed as a Poogle by one organization, a Boodle by another, and something else entirely by a third organization. You’re more likely to find Poogle in the listings than Boodle.

A portmanteau is a word that is created from two words that describe two different things. ‘Smog’, for example, is a combination of smoke and fog.

They also sponsor mixed-breed or designer dog shows, and they can point you to a breeder. Some even provide, or attempt to provide, the characteristics a given mixed breed is likely to take on.

READ  5 Ways Having A Dog Makes You More Attractive

Mixing two or more breeds of dogs has gone on for more than a century or two. In fact, some of today’s purebred dogs found in the AKC listings didn’t even exist a hundred years ago.

They are called purebreds, but they are in fact true designer dogs, being a mixed breed early on and eventually becoming purebreds once breeders stopped tinkering with their bloodlines.

The American Pit Bull, which is recognized as a purebred, can trace its ancestry back to the Stafford–shire Terrier and the English Bulldog, while the German Shepherd, also called the Alsatian, also came into being by cross-breeding.

The first mixed breed Poodle, according to the records, was born in Australia in the late 1980s.

A Poodle was crossed with a Labrador Retriever, and the famed Labradoodle came into being.

The Labradoodle is still a favored hybrid and is considered by many, but not the AKC, as being a breed unto itself.The AKC, however, does not recognize the Labradoodle as a pure breed.

The Labradoodle was followed a few years later by another half-Retriever, the Goldendoodle, or Golden Retriever-Poodle mix.

These two hybrids are medium- to large-sized dogs noted for their intelligence, high energy levels, sweet disposition, and for a love of water.

These hybrids in particular, require an inordinate amount of exercise, but all three breeds involved are considered to be among the most intelligent in the canine world.

Cross the two hybrids and you get a Double Doodle. There must be something very good about the Double Doodle as these mixes are by and large fairly pricey.

A Goldendoodle or Labradoodle puppy, who has well documented bloodlines can easily fetch $1,500.

Images of Goldendoodles suggest they are often similar in appearance to English Sheepdogs, except their eyes are more visible.

A Few of the Larger Poodle Hybrids

One of the reasons there are so many Poodle hybrids or mixes, is probably due to the fact that Poodles come in three basic sizes – large, medium, and small, or toy-size.

If you see a particularly large Poodle hybrid, it’s usually safe to say that one of its parents was a large Poodle.

You won’t hear much about some of the larger hybrids, either because of their scarcity or because they never became terribly popular. 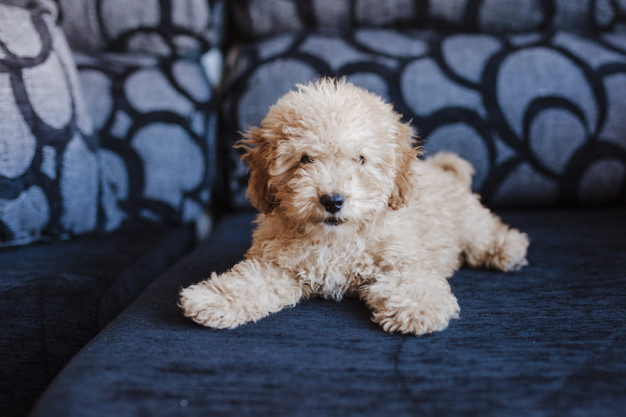 If you mix one of these highly intelligent dogs with a breed known to be vicious, or is a problem dog, you could end up with what some people refer to as a Frankendog.

You never really know what you’re going to end up with until you try however, and it pays to keep in mind that in cases where a dog turns out to be an animal to be feared, its owner or handler usually has something to do with it.

READ  6 Good Reasons To Adopt A Senior Or Older Dog

Take the Mastidoodle for instance. The Mastidoodle, a cross between a Mastiff and a Poodle can be a very large dog, and there are indeed a few of them around.

It is said to be a gentle giant, but one that needs plenty of exercise, so you’d need to teach it to walk nicely or it might drag you through the streets!

Poodles have been bred with Giant Schnauzers (Giant Schnoodle), with Doberman Pinschers (Doodleman Pinscher), Great Danes (Great Danoodle), and you might be able to guess at the other breed involved in the making of the Saint Berdoodle.

In the designer dog breeding business, chances of success depend upon the popularity of the mix or hybrid you came up with.

Mixing a Poodle with a Doberman Pinscher or a Saint Bernard may have an interesting outcome, but the truly premium results seem to happen when one small dog breed is mixed with another, for example, a Toy Poodle. The term ‘designer dog’ definitely seems to fit.

More than a few of these designer dogs are purchased because their very names hold so much attraction.

In other words; they’re cute. Who could refuse a Schnoodle (Schnauzer-Poodle), or the aforementioned Poogle (Beagle-Poodle).

A close relative of the Poogle would be the Bassetoodle (Basset Hound-Poodle), but this hybrid tends to be a bit larger than the average designer dog, and quite frankly, is not terribly attractive, looking somewhat like a Basset Hound in bad need of a haircut.

The number of Toy varieties is nevertheless quite large. Both the Toy Poodle and the Yorkshire Terrier are extremely popular breeds and the mix, the Yorkipoo, is nearly as popular, and usually a bit more expensive.

The Yorkipoo has a reputation for being mischievous, possibly because of the combination of the endless energy and high intelligence embodied in its parents. And it will also bark at almost anything.

The best of the lap dogs in this category would either be the Cockapoo (not a bird, but a Cocker Spaniel-Poodle mix) or the Maltapoo (Maltese-Poodle).

Both the Maltese and the Poodle are considered to be great companion dogs, as is the mix.

The Cockapoo is considered by many to make the best lap dog, as it is smart, loyal, mellow, and affectionate; definitely an attractive combination.

The Chipoo (Chihuahua-Poodle) and Peekapoo (Pekingese-Poodle) are popular, despite the fact that both the Chihuahua and Pekingese have a reputation for not being overly friendly towards children or strangers.

Two other designer dogs worth mentioning are the Shih-Poo and the Jack-a-Poo. The Shih-poo (Shih Tzu-Poodle) may suffer from having a somewhat undignified-sounding name, but that is the only negative thing that can be said about it.

The Shih-poo tends to be a cuddly, affectionate friend. Whether the Jack-a-Poo (Jack Russell Terrier-Poodle) is cuddly or not may be open to question. This combination of extreme intelligence and seemingly boundless Terrier energy is likely to keep you busy.

Jack Russell Terriers are sometimes thought of as being problem children, but their owners tend to love them to pieces, while at the same time trying to put up with their antics.

There are also Woodles, Scoodles, Whoodles, Standard Schnoodles, Foodles, and Foxhoodles, and the list goes on.

Finding a reputable breeder for some of these Poodle hybrids can be a challenge, and the price tag for some of the less-common mixes could be steep as well.

An established breeder is apt to be able to supply you with a pretty good idea of the character of an ‘oodle’ puppy.

In some cases you may just have to settle for the luck of the draw.

Bear in mind that the parents of a mix, hybrid, or designer dog are not necessarily purebreds, nor do they have to be.

They do, however, have to be hybrids of the two breeds involved.

If, for example, the father is a purebred Poodle and the mother is a Poodle-Yorkshire Terrier mix, the puppies will be 1/4 Yorkshire Terrier, and 3/4 Poodle, but would still be called Yorkipoos.

Some breeders note the difference, and some do not; but most breeders will provide the papers showing the bloodlines of your puppy.

You may be able to purchase a puppy that is something other than half-and-half for a lesser price, and still end up with a wonderful dog.

Taking a look at a number of images of these various mixes could leave you in a quandary.

You might want one of each. It would be hard to argue that the Poodle doesn’t mix well with other breeds.

It does in fact tend to mix well with a good many breeds, bringing with it a fine temperament, super intelligence, and a coat that doesn’t shed.

You can find images of most of these Poodle mixes by doing a search for specialized breeders.

Animal Planet provides a number of images of Poodle mixes and other breed mixes as well.

You’ll find you can easily fall in love with a Goldendoodle, a big dog with a tongue that is perpetually hanging out, as you can with a feisty Schnoodle. Don’t say you weren’t warned!